A powerful tool for experienced players

New add-on that will allow to study a lot of new statistics based on goals minutes.
Post Reply
28 posts

Is there anyway to check what happens when the score at 60th minute is a draw and at the last 30 minutes there is at least one goal ?
Top

I added the possibility to check not only the team but "similar teams". That means that will be considered in calculation not the team "Tottenham" but any team that have had similar ELO coefficient.
This is extremely good because maybe is less important what goals scored Man City 15 years ago then what goals scored teams that have had the relative value similar to today's City value.

Also added the possibility to select as opponent "teams like..." then choose a team from current league. The system will consider only the opponents that have had similar ELO (+/- selected value)

For example, in the picture, see how I set the buttons to see details about today-s game Tottenham-Utd.
In the last 15 years, there were 224 games between teams like Tottenham vs teams like Utd (ELO +/- 50 points)
We can see that home scored first in 115 games, and in the first 15 minutes in 38 games - that means around 17% - pretty good. 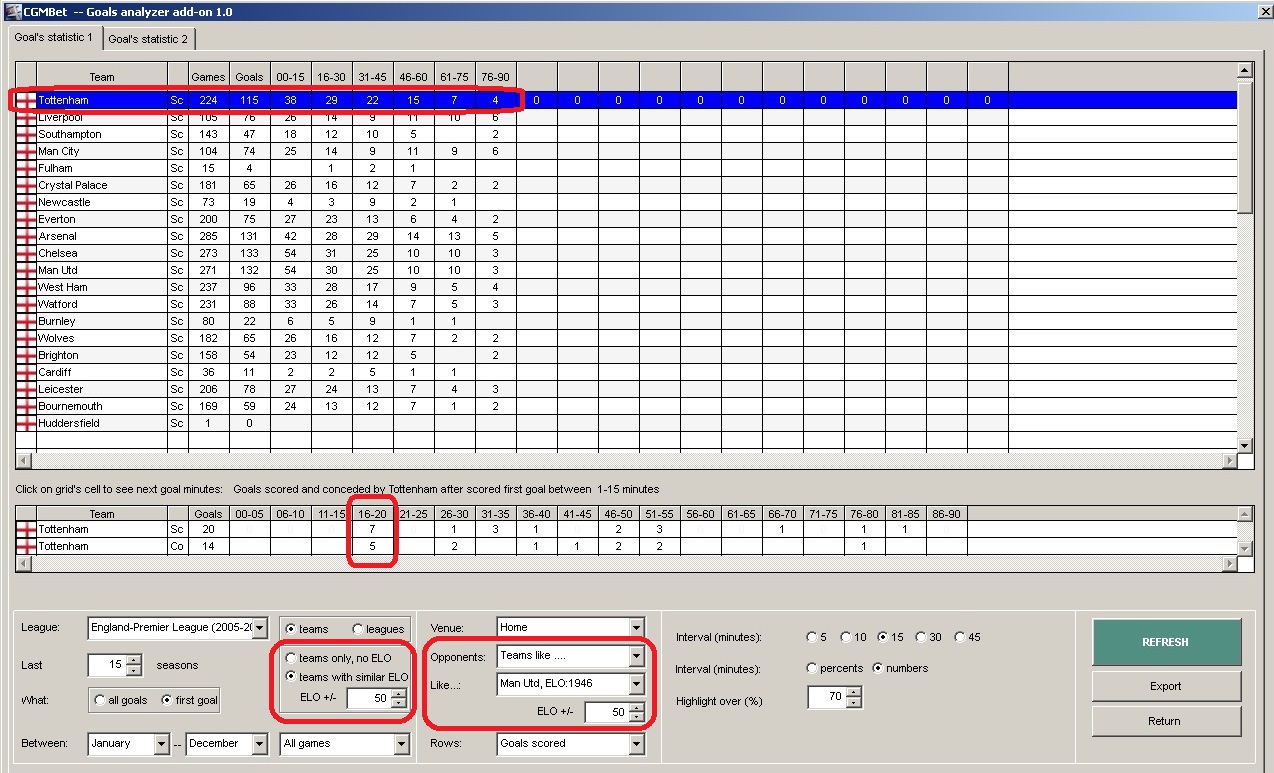 I have been playing around a bit, and have 2 small questions;

1. Why is it that if I select the teams rank, games only seem to go back to start of the 13/14 season, and if I deselect, the games go a lot further back in history?

1. I did not notice...but will check to see why this happened
2. Will add summer leagues also next month
www.cgmbet.com
Top

Could you please add over 0.5 and under 0.5 where it is highlighted?

It was easy and added... but I did not add so far because has no sense there as soon as the first goal has been scored so in any minute will have or 100% or 0%

What i want to do is to check the sequence of some results according to the goal times. For example: How many games with over 2.5 less than 1,60 and home team odds less than 1,60 have scored more than one goal after 40th minute? Some of the results are going to be 0-0 and i need to see how often it happens. Now the problem is that although you did set the parameter under 0.5 it does not show the events that ended 0-0. Can you make it to show the events please?
Top

I do not understand... you have correct score percent for 0-0 on the bottom side
Myabe I do not get the idea
www.cgmbet.com
Top

Is possible add balanced matches for study over/under goals market when one goal is scored?. Thanks!
Top

Please elaborate a little bit the idea to be sure I understand what exactly is the request
www.cgmbet.com
Top
Post Reply
28 posts